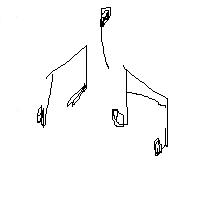 LW is staying over for a week, and Chen is jealous, so we agree to watch a Bobby McFerrin concert with Chen and her friend Silvia. Getting off work a early, I magically make it to Carnegie Hall on time, despite the train-track suspension, wondering what I should expect from Bobby beyond the Youtube videos (my one source of knowledge about the musical legend). Of course the jabbering female trio rudely interrupt my thinking, asking me from behind to move because my seat was reserved for their friend “who is probably late. ” I guess I have sexy back. Although I admit that the performance was totally another level back of sexy.

Bobby McFerrin is a tremendous presence. Calling him a “walking instrument” is inaccurate because he is definitely more than one. While singing, he taps both his microphone with his right pinky and drums his chest with his left palm for percussion – to accompany what seems like sometimes two simultaneous vocals from his mouth, a trick that I’ve also seen Wang Li Hom do (though it is still voodoo to me).

The rest of the Voicestra (three members for each of the four ranges) were not merely there for display, either. One of the alto ladies sang a free association which started with fruit baskets and the holes in them; two women comboed up for a tribal/folk -like vocal, which McFerrin transitioned into a haunting, almost primal melody; one of the bass made up a gospel track that filled the whole stadium. Between these improvised “solos,” which weren’t quite solos because the other members of the group would figure out accompaniments and start supporting the main vocal, were repeats of the same formula that worked way too damn well. Bobby would conjure up something with syllables that only he understands and dance up to each of the ranges and hang on his phrase. In two or three measures, they would grok his piece and join, creating a full-fledged “Voicestra” that was somehow able to slow down in a smooth coordination.

I couldn’t help smiling watching all of this because they seemed to have had so much damn fun up there. They chuckled and jabbed each other every time Bobby successfully made up one of this somethings; two of the sopranos spontaneously started teaching each other dance movements while singing, getting the third one to join in (which was tremendously cute because she was about sixty); when they asked for a volunteer to try to lead them in an improvisation and got a ridiculously talented guy who successfully led a whole piece, the Voicestra immediately did a poppy tribute song for him revolving around the phrase “Ben Ben Ben Ben Ben Ben Ben” (the guy’s name was Ben).

Bobby, who does this all in a blue T-shirt and jeans, didn’t waste much time talking. When he entered he immediately began his first piece; he only resigned to sit on the edge of the stage with the rest of the Voicestra to chat with the fans for a while after it was clear that the applauding fans weren’t leaving. After answering a few singing requests and politely declining further ones, McFerrin answered the questions with a mix of simplicity and wit. After the audience laughed when he claimed that improvisation is “not hard,” he explained that “all you needed to do” was to “always sing” and to “never stop”: “You never get stuck… the most stuck you are is if you are hanging on a phrase. Then just keep hanging. You just keep singing until you get that next note, and then you are unstuck.”

“It is like talking,” LW says. She is right as always – it really is like talking. You have to be confident, skirting the boring old small talk, and keep moving the conversation into more interesting directions. If you find one of those rare but joyful moments where all conversationalists present fall in love with the subject, you’ll not only forget the time, you will forget you’re talking.

Bobby also talked about his simple home, which apparently comes from the same fantasy where his soothing notes live before he plucks them out for us: a house in the woods so quiet that “you can hear the snow fall,” where he can go out for a walk every day with his dogs, and sing. Everyday. “Of course I’m not going to tell you where it is, so you can’t find me,” he jokes, but seriously – quietness is the most hard-to-find and undervalued commodity in Manhattan, something I’ve personally been continuously seeking in the City for the last six months or so.

In defiance of my horrible musical skills (I am, without doubt, the least musically gifted/experienced Asian I know, a miracle given the way Asian parents think), I improvised four songs on the walk back from work, ignoring the traffic, the wind, or the time. One sounded like really bad pop, and the other three resembled cliched video game music. But they were bearable, since I never stopped. And I was happy.