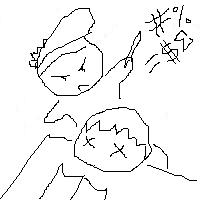 I’ve always enjoyed teaching – I taught 4 out of my 6 semesters in college out of my kind heart (the pay was negligible, but enough to pay for textbooks and a couple of meals at the cafe). Grading was a pain in the ass and most people don’t come to sections (except during exam reviews the room magically fills up), but even the zen experience of showing up to teach the weekly section for 3 or 4 heads cleansed my soul. Occasionally, I form a really nice connection with a couple of students – and I see the click of knowledge. Knowledge is one of the few precious resources we have that does not follow a conservation law, so I wanted to exploit this as much as possible. I would trade grading 5 problem sets for each spark of insight I see someone gain, since I knew how clear the whole world looked when I would have one of those sparks.

One of my friends from high school, J, decided to take off time after graduation to float his own boat. J. is an ambitious banana with more ideas than he can carry and an allergy to cubicles, so this was no surprise. After drifting for a few months, J decided he had learned enough from his experiences and wanted to try new things. However, instead of directly applying for jobs (and he did get a few sweet offers), he decided that he had a new love for studying – and taking tests. Soon he finished studying for the GMATs and the CFA, and he came upon a new goal – to take the GRE Math.

This started as a joke, probably from my end. But who would guess that someone with barely any math experience would take this test, usually something only someone interested in a math Ph D. would take? The frat boy was serious though, and I took him up on it.

I was reminded of my own curiosity as a 12-year old – I looked at big pictures. I was excited about big theorems and connections between mathematics. I loved jumping at all problems and tried to solve them (including Fermat’s Last Theorem, the Four Color Theorem, and everything else) without any care of how difficult they were. I did not know the technical ugliness that would await me. Everything was new, unlike now, the cynical part of the relationship – which is why I’m taking a break from math in the first place. I am happy when J asks the dumb questions – because now I’m forced to think about them and answer and not just assume I knew all the little details. I am happy when he asks the big questions – then I get to make big abstract speeches about how pretty of math is, which is funny since right now I don’t have any love for it, much like talking fondly of an ex to a third party only remembering everything I liked about her. I am happy when he stumbles, not only because it is amusing and a reminder of my own troubles when I learn, but also because it shows that he is trying. Finally, I am happy when he triumphs, even in the smallest of proofs or the smallest first precise use of a new term, because it means something worked between us.

Besides my own soul searching, I have learned many life lessons. Usually, when I taught, it was a teacher-student situation. This was a mixture between a teacher-student situation and a friend-friend situation. Furthermore, in a one-on-one situation I felt like I had to do more. I was more possessive, I pushed more, I thought I knew the best thing to do for him at every step. I was annoyed since he seemed to have wanted to learn analysis, topology, algebra, and geometry all at the same time, through several books. Looking back, I might be wrong – that’s certainly how I approached math when I was younger and nobody stopped me. While it was not the most efficient, it was the most fun, and you can’t learn if you don’t have fun. It is funny how I started reminding myself of my pushy parents through all of this, even though I was dealing with someone a year older than I was. Upon realizing the eternal horror of realizing that “you are becoming your parents,” I can raise two immediate lessons – One, I should step back and think more about my teaching strategy – instead of thinking what is best for him, I should think what is the best way for me to get him to understand what he wants to learn. Two, instead of looking at my parents’ pushes with annoyance, I should look back and understand what they wanted a bit more – they just wanted to build someone in the direction they wanted, thinking they knew what was best.

There are still a few months to go. I’ve learned a lot already, and I hope he has been learning at least as much =) to be honest, he is the one doing most of the work. Maybe the teacher-student relationship isn’t so asymmetrical after all.

P.S. Thanks to LW for the artistic genius.

One thought on “Teaching”